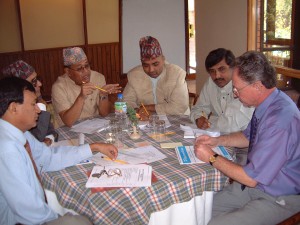 Michael Parry was appointed as the Financial Management Adviser to the Government of Nepal to support the Ministry of Finance understand and implement a large number of differing (and sometimes conflicting) recommendations for PFM reform. These recommendations had resulted from earlier studies by different experts that had never been followed through to implementaiotn.

The first stage was to form and work with a small team of Nepal government officials to conduct a survey of public financial management across Nepal.  Nepal operates a decentralised payment and accounting system based on some 75 District Treasury Comptroller Offices (DTCOs). Hence this involved travelling to all regions, some of which were only accessible on foot, to establish how a sample of such DTCOs functioned. One of the interesting conclusions, contrary to perceived wisdom, was that the standard of bookkeeping in the DTCOs was generally good.  This despite the fact that systems were wholly manual and paper based. There was in fact much good data within DTCOs on both revenues and expenditures, but this information was never aggregated into useful information available centrally.

Based on this survey it was decided that the most appropriate strategy was a process approach.  Under this approach a long term vision was established, together with a series of realistic steps leading to tangible outcomes. This approach is similar to the “Platform” approach developed by DFID, but less prescriptive as to stages.

At the budget level a new budget classification was developed consistent with the then applicable IMF Government Finance Statistics.  Simple automation enabled the preparation and printing of a multi lingual budget.

All of these tasks were successfully completed within a two year time frame.  The automation was undertaken using bespoke applications developed using MS Access, as this software was available, cheap and simple to use.

In addition a training centre was upgraded to train staff in the new processes, and “Mobile Training Unit” created. The latter comprised a Land Rover, laptop computers, a projector and manuals, with government trainers.  The Mobile Training Unit conducted training at a number of regional centres to minimise the transport problems of gathering staff in one centre.

Subsequently it was decided to expand the systems so that they provided a simple Financial Management Information System (FMIS) for government.  The different databases were moved to Oracle as a more robust platform, integrated, and progressively rolled out to further DTCOs.  A staged approach was adopted to implementing the system at DTCOs:

This approach was successful. Some 45 DTCOs were automated under the project, and subsequently the Government has rolled the system out to all DTCOs. The system has survived the civil war and continues to function.

In parallel at a central level the budget and accounting databases have been integrated and the classification updated to comply with GFS 2001 (though under a cash basis).

Two aspects of the project were unsuccessful:

Both of the above demonstrate the need to build support for, and commitment to, reforms from all stakeholders, e.g. politicians, user Ministries.

Overall this was a very successful project and demonstrates a number of lessons: