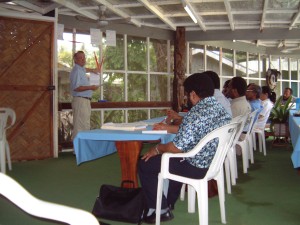 Papua New Guinea (PNG) represents unique development challenges. Geographically difficult terrain limits road communications and means many locations can only be reached by plane or boat. Home to some 20% of the world’s languages, many tribes have only been discovered in the 20th century, remain isolated, warlike and culturally diverse. At the other end of the scale PNG has considerable mineral resources which are being exploited by international companies.

This was a major project (US$ 8.9 million) to implement a range of PFM reforms.  The reforms embraced, budget, treasury and accounting both in the centre and across the Provinces. The project comprises a team of 23 consultants, and involves major systems procurement and implementation as well as extensive training and capacity building.  Completely new MTEF/budget classification and chart of accounts.

The project included development of a public financial management training capacity.  After considering various options, the agreed strategy was  to build on an existing institution so as to create sustainable training capacity.  Hence after research and negotiation a memorandum of understanding was entered into between the Ministry of Finance, the Institute of Development Administration (A government training institution) and the local accounting body to develop training programmes that would exempt successful participants form certain parts of the examination to qualify as a professional accountant.  A three-level training programme was developed, physical facilities upgraded and equipped and trainers trained.  Computer training laboratory established self teach computer based training for the “International Computer Driving License” (ICDL) implemented.

The majority of government staff involved in finance completed the Level 1 training and a significant number proceeded to level 2.  Level 3 training was initiated and the programme has been continued without external support.

Also under the project a Commercial Off The Shelf (COTS) Financial Management Information System (FMIS) was acquired using the two stage bidding process.  The acquisition was successful, but implementation presented major challenges and led to a dispute between the government and software company.  Although the system has eventually been implemented, it took longer and cost more than originally envisaged.

This has provided valuable lessons in the challenges of implementing an FMIS, including:

We have been responsible for FMIS acquisition and implementation in other countries, for example Nepal and the Maldives, and have learnt from the above lessons to achieve FMIS implementation on time and within budget.

We have also supported the design and delivery of training in the Gambia, Nigeria, Nepal, Bangladesh and for the OECD. Michael Parry was a former lecturer and Managing Director of a training company.