Public Financial Management (PFM) is concerned with the financial management of public sector entities – sovereign governments, sub-national levels of government and agencies of government.  PFM includes the raising of financial resources (through taxation, borrowing, etc.) and the spending of those resources to provide public goods and services.

PFM also includes the management of the assets and liabilities of governments and their agencies. Typically PFM is defined in terms of public sector financial planning, revenue and debt management, budgeting, budget execution, accounting, reporting, control and audit.

Thus PFM is at the heart of government.  Good PFM is necessary, though not sufficient, condition for good governance. Without strong PFM it is difficult  to achieve sustainable development, or to address corruption , poverty and other major social issues.  Good PFM enables governments to efficiently and effectively mobilise and utilise resource for public policy goals

The goals of PFM can be summarised in four dimensions as illustrated in the model below. Under each dimension the potential impact of PFM is identified. 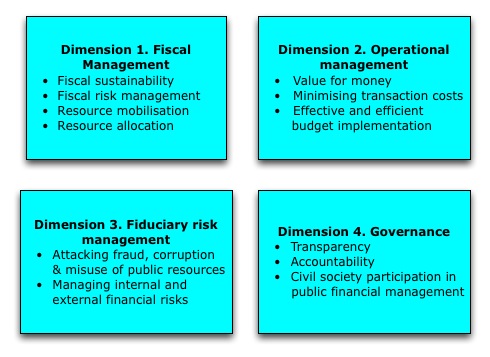 A PFM system has multiple aspects – PFM is a planning system, an information system, a purposive system (i.e. it is the mechanism by which money is raised and spent) and a control system.  The term “system” embraces institutions, laws, people, technology, processes and documents. Reform of PFM is complex, multi dimensional and typically a long term process.

Because of the significance of PFM, countries across the world are investing in upgrading PFM.   There are many models of good PFM practice, but there is no single unique solution to achieving good PFM. Building strong PFM within any country requires solutions appropriate to that country.